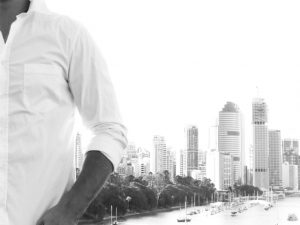 Now, some talk about the gospel and that’s okay. Nobody is offended or put-off by that. Some say Christ’s gospel, others call it this gospel, or even our gospel, and all of that is fine, too. But many Christians shake their heads in disbelief when some human, even an apostle like Paul, speaks as if this gospel is his to own.

Everything we view is tinted by the lens we look through. Perspective becomes reality. Our opinion on things depends on where we stand.

Casual observers can quite easily speak of Christ’s gospel. More serious students have no problem focusing on the specifics of this gospel. And those who have “walked the aisle” gladly talk about our gospel.

But only someone as single-hearted as Paul will call it my gospel.

Paul was never one of those in-and-out fellows. Before his conversion, he didn’t just oppose the Christian message, but he tried to kill as many Christians as he could. When that light shined down and revealed to him that Jesus was God, Paul was all-in. He made an abrupt change. He switched from insisting on total obedience to the law to defending those who discovered liberty in Jesus. The man who was once the greatest threat Christians faced, now counted it joy to suffer for that name. Once a Jewish “insider,” he now cast his lot with the very misfits his former colleagues were determined to silence.

That’s why he could write with such confidence “if any man be in Christ, he is a new creature. Old things pass way, all things become new” (II Corinthians 5). It wasn’t just a religious doctrine he’d been taught or read about, but what he’d experienced first-hand after his Damascus road experience.

Reading that now, from where we stand, might sound a bit clinical — if you fail to put the pieces together. You’ve got to connect Paul’s testimony to the doctrine he preached to realize that he was not just spouting phrases he’d learned at a new believer’s seminar, but was declaring what God had taught him through his own experience.

The doctrine Paul wrote did not originate in a sterile classroom laboratory, but sprang from his daily walk with God. The western writer Louis L’ Amour said that if you read about a spring or a trail in one of his books, that place really existed, and he had walked the path and drank from the stream. Paul had him beat by a few centuries. He walked the road of holiness and drank from the stream of self-discipline long before he ever wrote the first line of his beloved epistles.

That’s why Paul called it “my gospel.”  He had made it his when he surrendered his will to its call. It became the force of his life, and eventually defined who he was. The gospel was not something he had only observed, studied, or responded to, but it was who he had become. He had been crucified with Christ and was now a new creature, but he wasn’t living to satisfy himself; his life was hid in Christ. Before he wrote it, he lived it and became it.

It really was his gospel. He had let it change his whole world, his future plans, and all his expectations. He was totally committed. Sink or swim, live or die, he risked everything on it being true.

Those who only read a bit here and there, and those who spend the majority of their time pursuing things other than the gospel, will never understand how a guy can call it his gospel. Trying to understand Paul, but not wanting to match his commitment, they continue to wonder at his arrogance and miss the point of his message. Knowing the words of his gospel, they’ll never experience the fulness of its power.

To understand a man’s words, you must stand where he stands.

Unless you are willing to lose your life in Christ, like Paul, then don’t expect to understand what he said. You may think you grasp it, but in reality you are bending his words to fit the perspective from which you choose to look. Instead of understanding Paul, you are forcing him to become like you so that you can process his ideas in the environment you choose to create. In the end, you make his writing, and, therefore, his life, pointless because you do not grow into what he was, but rationalize away all he taught by adapting his words to fit your current lifestyle.

So, for you and me, now the question is: Is it the gospel, Christ’s gospel, a gospel, this gospel — or my gospel?

It all depends on where you stand.