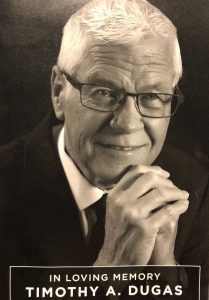 I was born a dozen miles up the San Joaquin Valley from the Bible college where Tim Dugas’ dad, Paul,  taught for several years, so the various names of the Dugas clan have been familiar for as long as I can remember. My father and grandfather both held the Dugas brothers, Paul and Phillip, in high regard, so I grew up with a generous dose of respect for the whole bunch. I guess that’s why I felt a little proud and important in July of 1980 when Tim Dugas spent a couple of hours on the sweltering Oklahoma District Campground telling me all the reasons why I needed to   go to Christian Life College. He’d recently returned to Stockton himself, and, following in his father’s footsteps,  was now part of the teaching and leadership team. A few weeks later, I loaded my clothes and my new stereo into my white diesel pickup, and headed west to claim all that Brother Dugas had promised was waiting for me.

He was working in the print shop when I arrived a week before classes were to start. He walked to the dorm with me and showed me all my options: lots of small, barren rooms with bunk beds crammed inside, and a common shower room conveniently located right in the middle – whose showers I would soon discover worked better than the drains. He didn’t tell me which room to choose, but he did lead me to a larger room at the very end of the hall and said, “If I was moving in, here’s where I’d stay.” I took his gentle “hint.” He walked back to the print shop, and I transferred all the boxes from the white pickup truck to that big room at the end of the hall.

He’d told me to stop by and see him after I’d unloaded my stuff, so I went back to the print shop where he was working on the latest edition of the Western District’s Gospel Tidings. He kept on working as he peppered me with questions. Where was I going to look for a job? Would I be at church Wednesday night? Did I know any of the other students? Later, I realized he was not making idle conversation. He was making plans for me and my truck. But at the moment, I was relishing being in that little shop and listening to him talk. When I left, he told me to come back the next morning and look him up. Said he had something he wanted to show me. I drove off excited that things were going well, and that Brother Dugas wanted to spend so much time with me.

I had a job interview first thing that next morning, so it was getting close to lunch time before I got back to the college. Brother Dugas was in the print shop. Just like the day before, he kept right on working while he asked more questions. Did I get the job? What did my parents think about the college? Did I have money to put down on my school bill? After a while, he either found a stopping place or had no more questions to ask, and told me to follow him around to the administration building.

Here I was, a brand-new student, on campus that morning because Brother Dugas had specifically asked for me, and now the two of us were walking together to the building where the offices and meeting rooms were. I wasn’t sure just what was about to happen, but how could it be anything but good? I was delighted to be there.

I never made it inside the administration building. I never even made it to the steps. Instead, Brother Dugas led me directly to the large, circular, concrete block fountain that filled the courtyard in front of the administration building. Seems there was dirt and some green stuff growing inside there that Brother Dugas just knew I had the knowledge and skill to get rid of. He had already stacked a brush and box of detergent right next to a brand-new water hose for me. Before I knew what was happening, he had disappeared behind the green doors of the administration building. There was nothing for me to do, but hook the water hose to the hydrant and get started. I spent the next three hours scrubbing those whitewashed concrete walls, and emerged soaked to the skin. Far as I could tell, the walls looked just as dirty and green as they did when I started, but apparently the effort satisfied Brother Dugas. We filled it with clean water that afternoon.

I learned that day that hanging with Tim Dugas was not going to get me a soft seat at the big table. However, I also learned that if I wanted to be where the action was, he was the guy I needed to follow because he always had something going on. Pickup basketball games at the gym, stacking print jobs in his shop, surprise fast days, and midnight runs to the truck stop down the road were some of the events that seemed to rotate through fairly often. He’d put you to work in a heartbeat, but, somehow, you never felt used. I guess it was because he worked too, and he never forgot to include you when he had something fun to do.

Nothing seemed to shake Tim Dugas. He was one of the most even keeled men I ever met. I remember one occasion when several key students were upset. By key, I mean people who paid their bills on time and who made sure all the student activities were organized. A group of them cornered Brother Dugas and expressed how disappointed they were and how their pastors had encouraged them to leave the school and come home. After listening for an hour or so, Brother Dugas ambled to door, unlocked it, turned back to face the half-dozen young men waiting his response to their pleas and threats, and said, “Fellas, do what you’ve got to do. I’ve got to go home and eat supper.” He didn’t rise to their threats or respond with any of his own. He made a few relevant comments, and left them to process their emotions. He was good at keeping the issue in focus.

In the Spring of 1981, Brother Dugas decided to revive the old tradition of hiking to the top of Half Dome during the college’s annual trip to Yosemite National Park. They’d done it every year when he was in high school at Stockton Christian School, and he was determined to do it again. So, he got a few of us together and sold us on the plan.

We were up early that morning. It was a cool, cloudy, sometimes dreary, day. Brother Dugas pushed us pretty hard. We stopped at Little Yosemite Valley and a couple of waterfalls, but he insisted we keep a steady pace. Finally, we reached the sold rock wall of Half Dome.

The Park Service had anchored cables to the top of the mountain, and had drilled pairs of holes every three feet or so in which they would set a pair of pipes. The cables were then attached to the tops of the pipes about waist high, allowing you to have a cable to hold to with both your right and left hands. The only problem was — they take the pipes down during the winter, and we got there before they had set them back up. There was nothing to hold the cables up. They laid flat against the solid surface of the mountain.

We’d come that far, Brother Dugas insisted that we finish. So, up we went. It was fairly easy at first, but increasingly difficult as we climbed. We’d pull ourselves up with the cable, finding plenty of cracks and crevices in the rock to secure our feet. When we got tired, we’d swing the cable over our shoulder, flip around, and lean our backs against the rock. We’d be looking out into nothing but sky. Birds, clouds, and helicopters flying below us. In the hour or so it took us to get to the top, banks of clouds would blow in, and it was like being caught in a dense fog: we couldn’t see anything.

Finally, we got to the top. It was too cloudy for us to see much, and after a few moments, I realized that Brother Dugas wasn’t with us. I went back down to where the cables were and saw Scott Haynes and Brother Dugas still climbing. Scott hollered up that Brother Dugas was having chest pains, and Scott was helping him find the easiest way to the top, giving him plenty of time to rest when needed. A few minutes later, they reached the top and we headed through the clouds to join the others.

The cloud cover hung over the valley and we couldn’t see a thing. Our small group was standing in a circle on the summit about to start back down when Brother Dugas spoke up and said, “Fellas, let’s just take a minute and thank God for a safe trip up here.” So, we grabbed hands and for the next few minutes thanked God for the wonder of His creation and His faithful care. When the prayer was finished, we opened our eyes and the clouds were all gone! Here is a photo taken with my old Instamatic camera that shows a few of us enjoying a clear view of the whole valley. This climb up Half Dome, the basketball games, the fast days, the late night meals at Carl’s — they could have all been accomplished with peers and friends his own age, but Brother Dugas sought out young guys, some of us a little too full of ourselves, that he could help along. He was discipling, mentoring, and coaching long before we added those terms to our ministry job descriptions.

A few months later, Brother Dugas would take a position in St. Louis that would lead to him influencing even more lives at Gateway College and Flo Valley Church and at The Sanctuary. I’d return to Oklahoma, then on to Maryland, then to Mississippi, and, finally, settle down in Tennessee. Our paths would cross only occasionally, but when we’d meet, it was like we’d only been apart for a few minutes. He remembered the trips. The talks. The visits. The family. The meals. And the fountain.

Most successful men don’t have time to spend with young, unproven, and impulsive guys. But Tim Dugas did. How he managed to accomplish all he did while putting up with all of us is a study in itself.

I join the long list of preachers who will miss those occasional visits with him, but who are eternally grateful that there once was a man who, for a while, pulled us inside his world, and supplied a strong voice and a pair of rough and steady hands that God used to make us all a little bit better.