Things I Didn’t Know I Needed (part one) 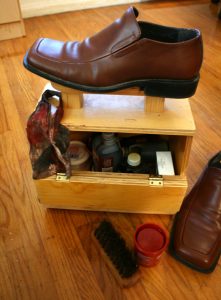 Today, we don’t have all those celebrations, but we are still encouraged to take care of our ministers (I Timothy 5:17). Hebrews 13 indicates that our preachers are essential to our eternal success, and I Corinthians 1:21 flat-out says that believers are saved by preaching. If for no other reason than to express our gratitude, we need to take good care of our preachers.

It wasn’t too many years ago that the preacher was one of the most respected men in his community. Folks considered it an honor to have the pastor in their homes, especially if a meal was involved. Bringing gifts for special occasions was common, and any thoughtful act that might make the pastor’s life a bit more comfortable was encouraged.

But times have changed. Along with the rest of us, preachers have prospered. Their houses are as nice as their neighbors’, and their children dress as stylish as any of their friends. No need, some will say, to do for him when he is doing as well as we are. Or maybe even better. Our blessings have made us blind to the reason God repeatedly admonished His people to honor and care for His ministers.

It’s more for our sakes than it is for his. Whether he has little or plenty doesn’t matter. While God has promised to take care of those who trust in Him, there are some things that we must do for ourselves. So, while God could provide for my pastor the same way he sent food to Elijah, He expects me to develop and protect my relationship with Him. I’ve got to do that. And serving my pastor helps me accomplish that.

Serving my pastor is a constant reminder of the important role that he plays. Both Hebrews 13 and I Corinthians 1 plainly state that I need him in my life. Serving him takes it from a general recognition to a personal understanding. Each act of service reminds me of the purpose for which God has placed him in my life.

Human nature being what it is, I’d eventually tend to regard my pastor as just another good friend with an opinion. But serving him reminds me, again, of the significance of his role to me personally. And it reinforces that God is who set it all in place.

While my pastor may be the beneficiary of my service, the motivation for my service is to bring my carnal spirit into submission to God’s word. That’s why I need a pastor to serve. So that I will remember that God has a plan that doesn’t always mesh with my ideas.

I need a pastor to serve because you grow attached to the people you serve. My pastor is worthy of my friendship, but I am wanting to fall in love with God and His ways. Serving my pastor helps me do that.

Serving builds appreciation. Appreciation cultivates respect. The more I respect my pastor, the more I will respect the God who called him and me.

Some think that all this serving talk will produce some type of preacher-hero worship that will replace faith in God. Perhaps. However, more than I fear that, I’m afraid that we will allow the customs around us to trivialize biblical commands. Besides, giving and serving are at the heart of the gospel. Why not start with the hand that feeds you?

Few of Israel’s prophets performed more miracles than fiery Elisha, but before he ever spoke or acted in the name of the Lord, he spent his days splashing water over the dusty hands of Elijah. Not just for a few weeks or a couple of months, but for at least a half-dozen years he was known as the servant “who poured water on the hands of Elijah” (II Kings 3:11). That wasn’t how Elijah described him, nor was it his own self-proclaimed title. His neighbors called him that because that’s what they watched him do. Day after day.

I realize that Elisha’s time and calling was very different from the way things work now, but there’s lots to be learned from his years of service.

You can’t pour water on the hands of a Man of God without getting close and personal. Elisha’s position of service hid the front-row seat from which he watched Elijah. Those looking on may have thought that Elijah was benefitting from the work of the younger man, but Elisha’s service allowed him to see how the prophet lived. He heard his prayers. Felt his anguish. Saw him respond to his detractors. Watched him work under God’s anointing. Elisha was covered in the dust the prophet’s feet kicked up. He shared his food, learned his quirks, witnessed his flaws.

You don’t get those kinds of experiences by taking a class or by reading the prophet’s memoirs. Simply having access doesn’t ensure that spiritual values will be transmitted. Observing is quite different than serving. To observe is to note the action while remaining isolated from the elements and emotion. The observer has nothing at stake so while his brain may be fully engaged, his heart is fast asleep. Not so with the servant. He’s at the very center of the thing. The sounds, the sights, the scents swirl around his head, while the taste of victory and defeat take turns dancing on his tongue. He can’t escape the sticky heat or the driving rain. Freeing the prime player from as many menial tasks as possible is his challenge, and he can’t allow anything to shift his focus or allegiance.

I’ve watched lots of World War II documentaries and can recite lots of facts and trivia about many battles. But my father-in-law drove a tank across Europe during some of the worst fighting and under the most severe conditions of that war. He’s felt shells rock his tank and bullets ping off the hatch. He mopped up his buddy’s blood, and recovered his best friend’s body. Along the way, he suffered frostbite that nearly forced the amputation of his foot.

I am observer. He is a servant.

There are precious things in life that God has hidden where only a servant will find them.

How can I serve my pastor? Here are a few suggestions, but the best ways will be the ones that you come up with that fit your specific situation.

Suggestion One. Relieve him from as many menial tasks as possible, freeing him to spend more time praying, studying, and ministering. Volunteer to replace light bulbs, make sure the bathrooms are stocked with supplies, wash the church van, mow his lawn, clean his car, mow the church lawn, pick-up his clothes from the cleaners — do any task that you see him doing around the church that is stealing his prayer, study, or ministry time.

Suggestion Two. Be there! If you aren’t around, you can’t be much of a servant. Come to church early. Ask if he needs anything. Hang near his office so that if someone comes with a problem that you can handle, you can take that load off of him. The pastor does not need to be unstopping plugged toilets ten minutes before church starts. If Sister Jone’s needs a ride to church, find someone to do that so he can continue his preparation. Take a look around. If there is trash in the halls or spider webs on the entrance porch, take care of it so he won’t be embarrassed when guests arrive. Just be there! Even if nothing needs to be done, he will be grateful that you are there.

Suggestion Three. Help him minister. Pray for your pastor. If he asks for folks to come early to church for prayer, be there — and pray! When folks come to the altar, come and pray with them. That allows him to move on to others if he needs to. Ask him if there are times you can visit sick folks in his place. If you do, make sure you always follow his instructions. Learn how to teach Bible studies so he can delegate some to you.

Suggestion Four. Note special occasions. A note, a gift card — small and inexpensive things can mean a lot when they are given in sincerity.  Note his birthday, anniversary, and significant holidays. Pastoral anniversaries don’t always mean much to church members, but to your pastor, that marks a significant milestone in fulfilling the call of God. He will appreciate your thoughtfulness.

Suggestion Five. Push him to spend time with his family. Many pastors spend their ministry far from their homes and extended families. Encourage your pastor to visit his family often. Ask how you can help make it possible. Often, money is not the problem, but little tasks and his feeling that some will think he is shirking his duties are the culprits. Get in his corner and help him get to see his family.

Suggestion Six. Advocate for his rest and rejuvenation. A pastor needs two straight weeks of vacation. After he has served for several years, giving him a month to rest and recharge would greatly benefit both him and the church. (I’ll explain more fully in a later post).  Most of the time, he will not push for these things. Be his advocate. Make influential members of your church aware of the need and benefits of periods of rest away from the congregation.

Suggestion Seven. Just do nice things for no reason. If he is going to a conference, ask if you can wash and clean his car. Mow his lawn while he is out of town. Buy him a book.  Arrange for a night for him and his wife in a hotel. Babysit so they can go to dinner.

You may not have thought much about it, but if you want to excel in the kingdom of God, you really do need a pastor to serve.