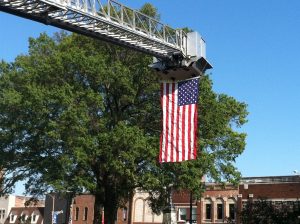 The pop of firecrackers and the explosion of light and color across the black sky mark the arrival of the fourth day of the month of July just as they have for past 239 years since John Hancock and his fellow rebels signed the Declaration of Independence. For me, the joy and glory that accompany this holiday are bit subdued this time around. The liberty that we celebrate has been redefined through the years, and its boundaries are significantly more confining than they were when I was a youth.

Israel’s enemy destroyed the beautiful temple that was Israel’s pride and joy. Years later,  it was rebuilt and the young men cheered and danced in celebration. But when the old men walked through, they wept bitter tears because the new temple lacked the awe inspiring magnificence of the old. Gone were the soaring walls that glowed golden in the evening sun. The arches, the porches, the stunning views, all gone. The young men had never walked through the old temple so they had nothing to compare their present to. The old men, however, knew what had been lost. The shouts of the young and the cries of the old mingled together until the joy and the sadness became indistinguishable.

Kind of like our country today. The liberties our youth embrace are but the shattered remains of what their grandparents enjoyed. While the elders grieve, the youth, who were born too late to comprehend their elders’ loss, dance to a homogenized song of freedom, one whose lyrics have been sanitized to prevent anyone from being offended.

We’ve come so far since that sweltering summer in Philadelphia when Ben Franklin proposed that those gathered to form a new nation seek divine assistance. What came from that meeting was nothing short of miraculous. That representatives from thirteen independent, self-governing colonies would agree on the basic principles that became the Constitution of the United States is almost beyond belief. Our current crop of representatives couldn’t even get on the same page when they created our healthcare system. With a Democrat-controlled Congress, not a single option offered by the Republicans was included. And not a single Republican voted for the final package. To look back at the formation of our nation and not see the hand of God is to ignore the self-centered arrogance mankind demonstrates every day. That the colonists could overcome that while these who were born and reared in freedom cannot, points, again, to the hand of providence.

Our founding fathers were quite confident of God’s hand upon their efforts. in 1789, Congress asked President George Washington to proclaim a day of prayer and thanksgiving. The President agreed, saying that all should acknowledge “with grateful hearts the many signal favors of Almighty God, especially by affording them an opportunity peaceably to establish a form of government for their safety and happiness.”

Our fathers purposely established this nation upon Biblical and Christian principles. They were equally certain those principles would be required to sustain it. Our twenty-third President, Benjamin Harrison asked, “If you take out of your statutes, your constitution, your family life, all that is taken from the sacred book, what would there be left to bind society together?”

Later, President Franklin Roosevelt would say, “We cannot read the history of our rise and development as a nation without reckoning with the place the Bible has occupied in shaping the advances of the Republic. Where we have been the truest and most consistent in obeying its precepts, we have attained the greatest measure of contentment and prosperity.”

And in-between those two presidents, President Coolidge declared that “the foundations of our society and government rest so much on the teachings of the Bible that it would be difficult to support them if faith in those teachings would cease to be practically universal in our country.”

Quotes like these from influential Americans used to fill the history books our children used in school. You’ll be hard pressed to find any today. Matter of fact, most history teachers aren’t familiar with these quotes. They weren’t in their textbooks, either.

Later generations decided that they knew better than their fathers. But instead of attacking our foundation right away,  they began pointing out the flaws in those who laid it. They noted that these Bible thumpers took the land away from the indians who had it first, and some of them even owned slaves. They were dishonest traders who used the Bible in an attempt to fool others into thinking they were righteous.

It took awhile, but the rewriting of our history worked. Nowadays, reading the book that our early presidents said is essential to our liberties will get a school boy in trouble and a Marine tossed out of the service.

Many of today’s movers and shakers, and those who line up behind them, will consider my sentiments to be those of a narrow-minded phobe who clings to his Bible and lacks the basic understanding of how complex the world has become. But that’s okay.  I’ve lived long enough to measure the loss, and I’m adding my voice of concern to those who have warned through the years that if we forsake these principles, we shall be, as President Ronald Reagan said, “A nation gone under.”

A strong wind of change is blowing across our world, and I don’t particularly like what it’s blowing in. However, God’s word, that same book that our forefathers used as a guide for establishing our nation, warned us that this day would come. Our nation is intent on satisfying their own lusts and silencing any voice that might speak of a different way. They preach tolerance, but what they mean is shut up and get out of my way. They say we should all come together and find common ground, but what they mean is if you can’t be like us, then be quiet. Like wild dogs crazed by the taste of blood, they don’t realize it’s their own future that they are destroying.

As an American, I’m more grateful than ever for the life I’ve been blessed to enjoy, but the liberties I see slipping away will dampen my celebrating a bit. But as a Christian, I’ve never anticipated the future with such excitement because the Bible, which has proven true time and again, promises that God will build His Church despite men’s best attempts to destroy it. I’ll celebrate more the eternal and lasting liberty with which Christ makes free.

So while you are watching those fireworks flash across the night sky, rejoice that you live in what is still the greatest nation on Earth — and keep looking up because your redemption draws nigh. And that is what is really worth celebrating.