America, Meet Your Next President! 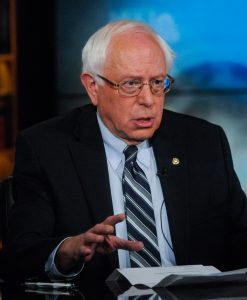 Your next President is a 74-year-old carpenter, film maker, and politician. He plans to raise your taxes, give you free universal healthcare, make college a free ride for all, raise the minimum wage to $15 an hour, force large banks to downsize, guarantee you 12 weeks of paid medical and family leave to go with at least two weeks paid vacation, and start a universal child care program for children 0-3.

Without changing the prices on the value menu at McDonalds.

He believes that “climate change ravages our planet and our people – all because the wealthiest industry in the history of our planet has bribed politicians into ignoring science.” He says that “today in America, if you are black, you can be killed for getting a pack of Skittles during a basketball game. Or murdered in your church while you are praying” – as if no white, red, or brown people have ever been murdered. As for working for the LGBT activists, as President he will “sign into law the Equality Act, the Every Child Deserves a Family Act, and any other bill that prohibits discrimination against LGBT people.” He also promises to “veto any legislation that purports to “protect” religious liberty at the expense of others’ rights.”

He wasn’t supposed to have a snowball’s chance, but Hillary’s past is catching up with her. Today’s youth aren’t as enamored with the Clintons as their parents were, so despite the media’s attempt to keep her campaign alive, young democrats are joining up with Bernie and leaving her to flounder in her own email. By convention time, she’ll be history. In the party that chides the rest of us for lacking diversity, the old white man will defeat the old white lady.

Think I’m joking? I wish. But before you laugh too hard, take a look at this. I’m not the only one talking about it.

But with all conservative Republicans, independents, and Christians clamoring for change, how in the world will Bernie be able to defeat a more conservative candidate?

I’m not sure I can answer that from every angle. But there is one thing that I do know that makes it a little easier for him.

Christians take themselves out of the game.

Christians make elections about themselves instead of what they are intended to be: deciding who will fill a particular office. Some Christians have decided that inside the voting booth is where their religious convictions must be demonstrated, regardless of what it will cost their country. They’ve determined that they will only vote for a candidate whose stance on a particular moral issue is identical to theirs. If no candidate agrees with them, then they stay home and refuse to vote.

I’m not sure why they choose to draw the line at this particular spot. Maybe it’s because it is a free and painless demonstration. They can beat their chests and speak their minds and, personally, it costs them nothing. Say they felt that they shouldn’t support gay rights, for example. If all the candidates supported a gay agenda, then they could just say “we aren’t voting.” But if they said they weren’t going to do business with companies that support gay rights, then they’d have to take back that Macbook Pro and their kids’ iPhones, and unhook that Apple TV. That’s bit more involved than simply not going to the trouble to vote.

I’m not sure if that is the reason or not, but I know very few Christians who make the commitment not to vote who have made similar decisions in other parts of their lives. I’ve not known them to set criteria for the bank they would use, or the lawyer they would choose, or the financial advisor they would trust, or the football team they prefer. I don’t see them drawing the line at who designs their suits and ties, sells their favorite car, or arranges the Valentine bouquet they buy for their wives. Or teaches their children at school. Or owns the big resort with the famous mouse and duck that they – you get the picture?

Why must the voting booth, where it is impossible for anyone to know what you do inside, be the one place where our convictions must be on display?

When did voting become a religious ritual?

If you figure it out, let me know.

I do not write this in the hope that millions of Christians will read it and change their minds, and decide to vote in this Presidential election even if it is, in their minds, for the lessor of two evils. Those who have made this their battleground will die here before they’ll change.

So, click on his website and look around. And remember that one vote cast in the favor of his opponent would require two votes to overcome. Then, pray that God will move on a bunch of heathens with no convictions to vote for his opponent so we Christians, including those whose convictions won’t let them vote, can enjoy a few more years of this fading liberty and, perhaps, reach a few more lost souls.

When You Don't Meet The Expectations Of Others