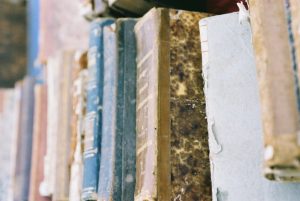 2016 was ushered in on rain drops and flood waters here in west Tennessee. Epic floods were forecast, and folks began the daunting task of moving and storing their belongs before the rivers crested. Farmers moved all of their equipment out of what we call the bottoms – the low ground where the Obion and Forked Deer Rivers meet and flow into the Mississippi. The newspaper ran a picture of the sheriff leading a convoy of nearly 50 tractors headed for higher ground. Fortunately, the crest was not as high as predicted so it looks as if we might be spared this go around.

Time to stop watching the water and get to work.

I’ve put together a reading list for this year. I’ve mixed a few new books in with some old ones I just never got around to reading. I also had a few recommendations from friends, so I added them to the list.

In no particular order, here are the books I’ll be starting the year with. I’d be interested in your comments, and to hear what is on your reading list.

1). Destiny and Power by Jon Meacham. A biography of President George Herbert Walker Bush. Whether or not you liked his politics, George Bush was one of the most experienced and savvy politicians to serve during my lifetime. I always admired his decision to not allow his helicopter to land on the White House lawn, where only Presidents land,  while he was acting President while the sitting President, Ronald Reagan, was undergoing emergency surgery. I thought that showed a lot of class and character. I’m looking forward to learning more about his life.

2). Necessary Endings by Dr. Henry Cloud. This book has been around for a while, but I’ve never read it. It came recommended by a couple of people – one was kind enough to purchase it for me. The premise, that there are employees, businesses, and relationships that we all have to give up in order to move forward, is intriguing.

3). The Temple: Its Ministry and Services by Alfred Edersheim. I want to learn a little more about the workings of the temple and the priests who served in the Old Testament, and this book looks promising.

4). All In! by Mark Batterson. I enjoyed the book he co-wrote,  A Trip Around The Sun, and decided to have a go at this one.

5). Dewey Short, Orator of the Ozarks by Robert S. Wiley. A biography of Dewey Short — a Congressmen from the little town in Missouri where my parents went to school. Coming from such a small rural area, he managed to muster considerable clout in Washington. He opposed the trends of FDR’s New Deal: “I say it destroys character, and that the destruction of individual character and of the feeling of personal responsibility that once was the strength and glory of a virile nation, of a great and free people, is fast becoming accomplished. Unless this tragic tendency ends, America will end.” An interesting observation in 1938. He was influential in the development of Table Rock Lake on the Missouri/Arkansas border.

6). Men At War, by  Alexander Rose. Tells the story of war from the experiences of ordinary soldiers at Bunker Hill, Gettysburg, and Iwo Jima.

7). A Leader’s Legacy by Kouzes and Posner. A short book from the men who gave us The Leadership Challenge, one of the world’s best leadership manuals.

These are the books I’ve got stacked by my chair. I’ve got a few more stored on my iPad (I usually use the Kindle app). We’ll talk about those later.

What’s stacked by your reading chair? Please share in the comments. I’d love to hear from you.

Happy reading and much success in 2016!