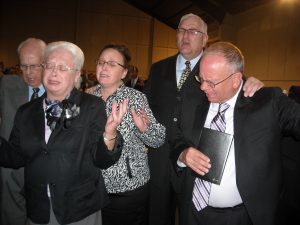 A few months ago, doctors told a lady in our church that she had cancer. Her family and friends, obviously, were devastated. A follow-up visit was scheduled to gain more specific information about her condition. Folks agreed to gather at the church and  pray for her the night before she was to report for that appointment.

Most of the crowd who came to pray that evening were younger –  say, less than 40 years old. The sick woman has a brother who has children that age. Although he attends a Pentecostal church a few miles away, he came to our church that night to help pray for his sister.

From the beginning, it was obvious that this was not his first prayer meeting. It was equally obvious that he meant business. His voice was clear and strong, his words specific. You could tell, and feel, that he knew how to get heaven’s attention. Without arrogance or stilted ritual, his passionate voice filled the air, spoken with a confidence that only years of dialog with a close friend could produce.

While he prayed, I was transported back to the prayer room in the church of my childhood. The room was lit by the light from the pastor’s study that filtered through the window way up high where the wall and ceiling met. Voices just like that lady’s brother’s filled that room every Sunday. Faith and confidence in God was so strong you could feel it. As a boy, I remember being engulfed in the warm comfort of God’s presence in that room.

Back then, that kind of praying was just part of life. You went to school. You went to the grocery store. You mowed the lawn. You gathered for fervent prayer. The powerful faith that flowed from the prayer room was nothing unusual. It was a part of life that happened every Sunday. That’s who we were and that’s what we did. Those men prayed with faith and fervor and touched God. Along with them, I was blessed by God’s response.

That kind of spontaneous, from-the-heart prayer is not as common today. We still pray – and every bit as sincerely. However, the passion and raw emotion of that earlier generation is not quite as prevalent. We’ve become more systematic in our approach. We get right to the point and get it done. Serious about time management (wouldn’t God expect that?), we seldom linger in His presence.

The work of prayer has been replaced by the form of prayer. We go through the proper motions, but we don’t engage our emotions and focus our energy as if prayer is our last resort. It seems we always have a plan B in case prayer doesn’t work. A credit card, a medical plan, a friend in the office – some ace in the hole that brings us comfort, but siphons the intensity from our prayers.

There’s nothing wrong with finding ways to deal with life’s problems, but if our faith rests more in our solutions than in our Savior, our prayers become speeches: empty shells that have no life because none is needed nor expected. We pray them, not really expecting an answer, but because prayer is what Christians do. Our prayers are no longer the “effectual, fervent prayer of a righteous man” that avails much, but verbal forms that we fill out as residents of God’s kingdom. Once the blanks are all filled in, we’re done.

How will that happen? It will happen when you and I fill the prayer room and our homes with the same uninhibited prayers that we heard as children. When we shove aside the duties of our professional Christian roles to consistently do the work of prayer, our kids will start to get the message that this is important. When the fire of God burns in our souls, the heat will warm their hearts, and they will be compelled to join in. Instead of building more fireplaces, it’s time we set a flame in the ones we have.

My grandfather was a preacher for more than fifty years. He traveled around and preached in hundreds of churches. In all our visits, I don’t recall him once telling me how impressed he was by some church’s sanctuary or pastor’s office. He rated churches by their prayer rooms. “Now that church,” he’d say, “they’ve got a nice prayer room.”

I remember one of the last times he visited our church. He came down the stairs that led to two rooms above the foyer: prayer rooms. He walked past the reclaimed barn siding that covered the walls. He didn’t even look up at the multi-angled ceiling with the hidden light troughs. He made no comment about the custom built pulpit or the hand-laid design set in the back wall. He said nothing about the twin solid walnut altars standing in front of the pulpit.

He grinned at me and patted my shoulder. “Boy, I like those prayer rooms!” he told me. “You can bawl and squall in there and nobody will bother you.”

Then, we can truly claim to be His house – the one that’s called a house of prayer.

That lady that had cancer? The one we prayed for the night before her next doctor’s appointment when her brother led us into the presence of the Lord?

When she got to the doctor that next day, it seems it wasn’t cancer after all. She’s doing fine.

The effectual, fervent prayer of a righteous man still works.

Two great men of prayer are pictured in the photo above. On the left is my grandpa that I mentioned earlier, O.A. Ellingsworth. Next to him is Bishop Kenneth Haney whose prayer time and yellow legal pads are legendary to the hundreds of young preachers his life inspired.